The History Behind: Tamales


Aside from bread, stew, and roasted meat, the tamale is easily one of the oldest meals in history. Recorded in its most ancient forms as early as 5,000 BC in Mesoamerican history, the lowly tamale actually has a sizable claim to fame as being a food that helped shape the warring culture of the Aztec, Mayan, Incan, and other Pre-Colombian civilizations. However, while this dish's back story suggests that the tamale was created by the Aztecs, there is great debate on who actually invented the tamale as we know it today. Unfortunately, no one truly knows. 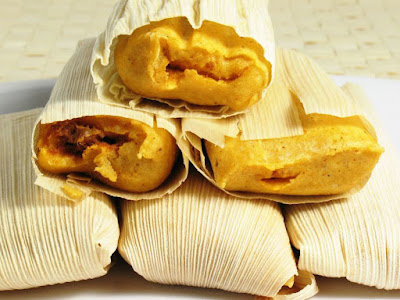 As the tamales grand legend goes, women were taken along by war bands in order to serve as cooks for the soldiers. They were in charge of creating the masa dough for tortillas, roasting meat, making stew, and otherwise just feeding everyone while the men fought their battles. However, as the warring nature of the Aztecs hit its peak, the women could no longer keep up with demand of preparing the nixtamal, or corn soaked in an alkaline solution, used to make masa dough for the larger and larger war bands. Instead of making fresh dough every day, these industrious women decided that something more portable and able to be made in mass was needed.  Through these overworked women, the tamale, or at least the one closer to the one we know today, was born.

This Mesoamerican version of the sandwich was designed so that it could be made ahead, packed among the other items of a warrior's repertoire and heated up as needed whether it be steamed or grilled over a fire. Of course, as the ingredients inside were already cooked, they could always be eaten cold if the war band need to stay hidden or remain on the move.

While the world today only knows a select few varieties of tamale, back in their early history the tamale had unparalleled diversity. There were plain tamales that were just filled with masa; tamales stuffed with red, black, green, or yellow chilies; sweet dessert tamales that were filled with chocolate, honey, nuts, and fruit; and, of course, tamales stuffed with cooked meat including some more curious offerings like frog, flamingo, bee, ox, and even tadpoles.

The size and wrappings of the early tamale varied just as much as the fillings did. While today the world only truly knows the tamale as being wrapped in a corn husk or banana leaf, originally the wrapping was dependent on how the tamale would be cooked on the road and what was available. Avocado leaves, soft tree bark, and even fabric have been reported to be used when making tamales, but the water resistance and durability of banana leaves and corn husks eventually won out.

By comparison, today's tamales seem really quite toned down. However, there is one tradition of the original tamale that does persist. As the food is so labor intensive, the tamale is primarily saved for holidays or special occasions. However, as it was originally, this dish brings all the women of a household together to prepare the ingredients and assemble hundreds of tamales at a time before steaming them in a massive pot for the whole family to enjoy, just like women of old.

Tamales are so easy to find at any quality restaurant that specializes in Mexican or Latin cuisine, but outside of those from Latin communities, no one really appreciates how much work goes into making them, let along the necessity that went into their rise to food fame.
Posted by Amerowolf at 12:32 PM

Email ThisBlogThis!Share to TwitterShare to FacebookShare to Pinterest
Labels: the history behind